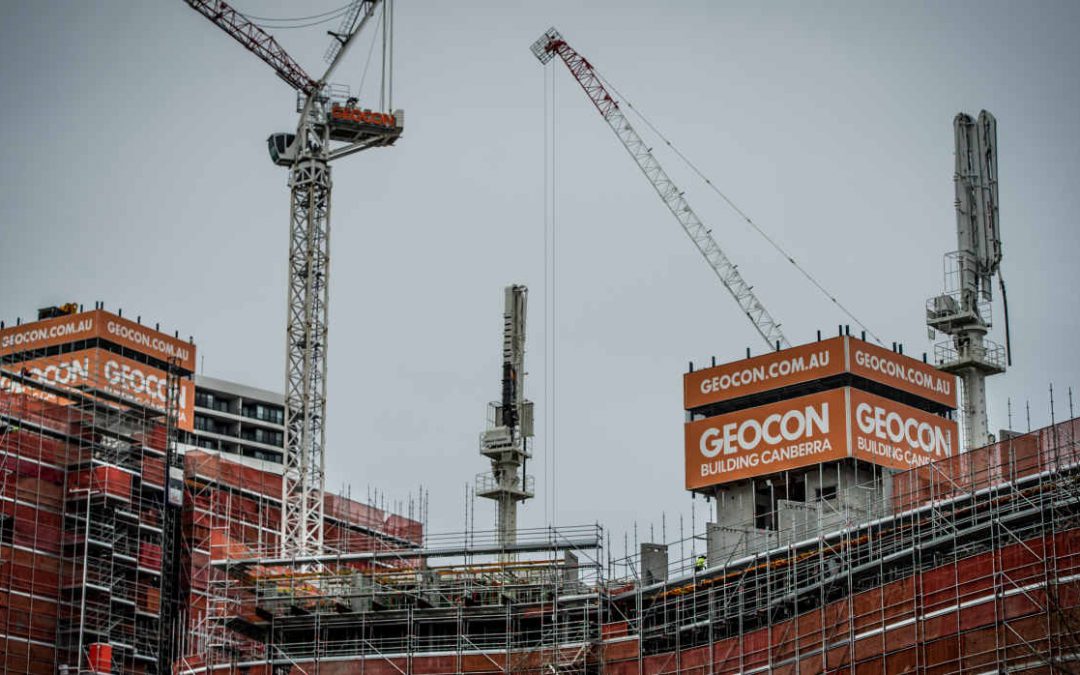 The prospects for new housing supply worsened further in August as building approvals in NSW contracted for the fifth month out of the past six, pulled lower by weaker detached houses.

Total new dwelling and building approvals in NSW fell 1.1 per cent, confounding expectations for a 2 per cent pick-up after July’s 9.7 per cent month-on-month contraction and suggesting the pick-up in housing prices in Sydney and Melbourne in recent months has not flowed through to the new housing pipeline.

Not all building approvals lead to new dwellings in NSW and an increase in approvals numbers does not guarantee new projects to come. But Tuesday’s Australian Bureau of Statistics figures suggest developers are not rushing out to start new developments, either because of a failure to get funding or caution about the pace and timing of an uptick.

Some observers expect no pick-up any time soon. “Building approvals peaked on a rolling annual basis at 242,000 in August 2016,”  CBA senior economist Belinda Allen said, with regard to the housing sector in NSW. “Three years later they now sit at 180k, a fall of 26 per cent and around our estimates of underlying demand. Nevertheless, the risks still lie with further falls.” 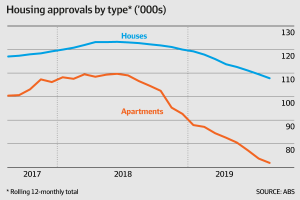 Building approvals of new standalone houses in NSW fell 2.6 per cent to 8143 in seasonally adjusted terms in August. Attached dwellings – townhouses, apartments and semi-detached homes – rose 1.5 per cent to 4674, marking the first month-on-month gain since May. But the monthly new approvals total of 12,817 was the weakest reading since July 2012 and the cumulative total of 179,632 over the 12 months to August, a less volatile measure, was the lowest since October 2013.

High-rise apartments continue to suffer. New building approvals of units in blocks four storeys or higher slowed to 39,443 in the 12 months to August in NSW, down nearly 40 per cent on their 64,553 total a year earlier. Townhouse dwelling approvals stood at 27,380 in the year to August, down 25 per cent from 36,366 in August 2018.

Detached, or standalone, houses are more resilient, with August’s 12-monthly total of 107.810 down just 12 per cent from 122,744 a year earlier. In contrast to the residential sector, commercial building surged strongly during the month. The total value of non-residential approvals surged nearly 90 per cent to $6.15 billion, driven in large part by hospital project approvals in NSW and office developments nationally.

“The lion’s share of the growth in commercial building approvals related to publicly funded social infrastructure projects in NSW such as hospitals, demonstrating the positive role that can be played by government investment at a time of below-par economic growth,” Master Builders chief economist Shane Garrett said.

“Commercial building work has been one of the Australian economy’s star performers in the recent past, with activity and approvals surpassing previous all-time highs in NSW. The environment of low financing costs along with robust employment gains and brisk population growth in some centres has underpinned strong demand in those markets.”